Watching your team snatch an unlikely 1-0 win away against your biggest rivals by parking the bus for 80 minutes, then getting a lucky break in the dying minutes of the game for your target man or poacher to slot it home is deeply satisfying.

What is equally satisfying is watching your well-oiled team play some intricate passing before your false 9 threads a through ball for the inside forward to finish the nice move with a cool finish past the opposition goalkeeper.

The two situations at extreme stages of your FM22 managerial career are quite difficult to get right. Coming up with a system that the false 9 excels in football manager is quite tricky.

More often than not, you will end up with a system that gets 65+% possession but only creates 4 or 5 chances the whole game.

You might also end up with your mezzalas, advanced playmakers, or box-to-box midfielders taking shots from 35 yards out because there is no space ahead of them.

Central to Pep’s system is the false 9 which I will be shedding light on, and how I go about utilizing the role in football manager.

FM22 describes the false 9 as an unconventional lone forward who operates similarly to the playmakers who occupy the attacking midfield position. He will drop deep into midfield to create a problem for the central defenders who can either follow him, which in turn creates space behind them for onrushing midfielders, forwards, or wingers to exploit. If the central defenders choose to let the false 9 drop into midfield by himself, they then provide him time to either dribble or pick out a telling pass to his teammates.

Football manager considers the false 9 a playmaker role, and players will actively look to get the ball to their false 9 who will then dictate how the team’s attack develops. The role is only available with a support duty.

The false 9 role suits possession-based tactics, and it is quite difficult to get it working in systems that rely on quickly breaking through on goal using long balls. Suitable roles for strikers in a counter-attacking tactic might be the pressing forward, advanced forward, or even the target man, who will hold up play before feeding his striking partner or flying wingers out wide.

The false 9 can work in a two-striker pairing, but it is more common to deploy him as a lone striker, then having players in the wide positions drift inwards to take advantage of the space that is created by his movement.

Attributes Required For The False 9 In Football Manager

The false 9 being a playmaker role demands that the striker being deployed here should first and foremost be comfortable on the ball. However, as any other striker, he will still be expected to routinely chip in with a goal or two.

Therefore, passing, vision, and technique should be the first things you look for in a potential false 9. It is ideal to have these three attributes rated at 15 or higher if you are managing a top side from the top five leagues in Europe.

A good attribute rating in dribbling, acceleration, agility, and flair will make it easier for your false 9 to get past opposition defenders and midfielders so that he can have the space to work his magic.

Regarding his ability to put the ball in the net, finishing, anticipation, off the ball, and composure needs to be at a respectable level. However, a poor rating in one or two of these attributes is not the end of the world, as long as he has good ones in the playmaking department. The goal-scoring burden can be shouldered by other members of the team.

It is difficult to get a player who satisfies all the attributes above unless you get a Messi-like regen. Therefore, it is acceptable to look past one or two attributes that your preferred false 9 might be lacking in, then tweak your tactic to hide his flaw without hurting the team’s overall game plan.

Player Traits For A False 9 In Football Manager

Sticking to his playmaking duties, the false 9 will excel with the following player traits;

As some of the above player traits will hinder your player in conventional striker roles such as that of a poacher and advanced forward. It is vital that you are confident you will not change your false 9’s role in the future before you get him started on learning “comes deep to get ball” for instance.

In the tactic below, the false 9 will happily drop back into midfield, creating space for the central midfielder on attack duty to surge in the box, as well as the box-to-box midfielder who will be more cautious in choosing his moments to join the attack.

The winger on attack duty will play a part in stretching the play out wide, while the inside forward will drift inwards, creating space for the wing back behind him to affect play on the overlap.

The anchorman and the inverted wing back will form the defensive bodies in midfield, guarding against counter-attacks when the other players join in on the attack.

I have intentionally avoided having another playmaker in the team so that the false 9 will not have to compete for the ball with another member of his team.

This is not to say that multiple playmakers can not work in a tactic. You simply have to space them out so that they do not trip over themselves operating in the same spaces.

An advanced playmaker in the wing position for example can coexist well with a libero in defence or a regista in the defensive midfield position. Having two playmakers in the same position strata, however, might be a little more difficult getting the balance right as they are bound to get in each other’s way.

If the false 9 does not solve the needs of your team, you can take a look at the shadow striker guide or the enganche or trequartista who approach the playmaking duties for your team from a different angle. 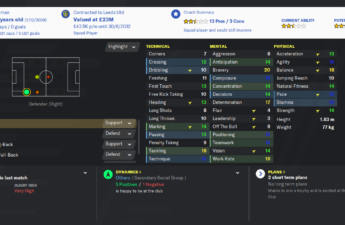 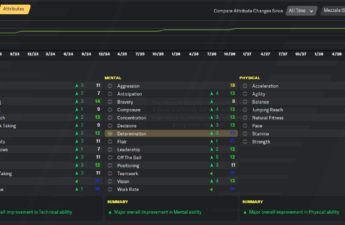